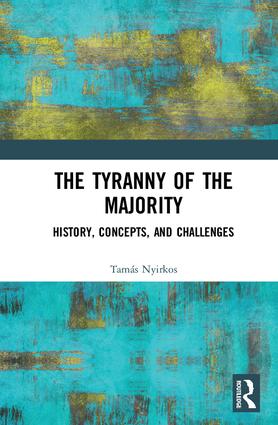 (An excerpt from the Introduction)

Both ‘majority’ and ‘tyranny’ have multiple meanings. ‘Majority’ may refer to the majority of society as a whole; to the majority of individuals possessing political rights; the majority of those actually voting; and in modern representative systems to the prevailing majority of legislative and executive bodies elected by the political community. The four meanings of majority are trivially non-identical, and even a large part of today’s democracies apply the terms ‘majority’ and ‘minority’ to entirely different proportions. Mainly, though not exclusively, because of disproportional representation.

Speaking of proportions: majority is also a word with multiple meanings because it can signify a relative majority (forty percent of a given society, community, or representative body against the thirty-five and the twenty-five percent); or an absolute majority (fifty percent plus one person); not to mention the different cases of qualified majority (the most widely known being the mythical ‘two-third,’ but in the course of history, a whole range of other proportions had been adopted as well). Although it would seem comfortable to avoid such hair-splitting by limiting the use of the word to the part exceeding fifty percent, it should not be forgotten that the main objective of disproportional representation has always been to transform relative majorities into more manageable absolute ones; while the idea behind qualified majorities has been that only these express a ‘real’ (sober, trustworthy, enduring) majority, and not any simple, barely achieved, momentary one.

All of which, however, do not exhaust all interpretations, especially in the case of qualified majorities. It may be asked, for instance, whether it is sufficient that a however large majority should prevail at a given time only, or the larger part of consecutive decision-makers is also required to establish a well-founded majority. The idea may seem esoteric at first sight, but historical and current examples in the case of constitutional changes in various countries do rely on a similar principle.

All of the above, however, still define the majority as it is most easily constructed by voting procedures or opinion polls, and say little about the ontological status of the majority as such. To give an essential, philosophical definition of what constitutes a majority, and especially ‘the’ majority of society or ‘the’ people (if not the number of votes cast by individuals on particular and highly different issues) does not only seem esoteric, but usually is. Yet, while the Rousseauian concept of the ‘general will’ (which normally, but not necessarily coincides with the empirical will of the majority), populist slogans about the ‘silent majority,’ or expressions like the ‘moral majority’ are difficult to grasp analytically, it would be a mistake to dismiss them, since it is exactly these formulas which make it possible for political actors to posit themselves not as anti-democratic, but as advocates of an alternative, more substantial sort of democracy.

Before, however, one should quickly assume that such formulas are nothing but an abuse of words, justifying the power of flesh and blood minorities in the name of imaginary majorities, let us add that a very non-populist author like Tocqueville referred in a no less opaque way to a largely hypothetical majority. When the argument against majority tyranny in Democracy in America appealed “from the sovereignty of the people to the sovereignty of the human race” (2010: 410), it was unclear whether it was to abandon the idea of majority rule in general, or – in a highly unfortunate, and in Tocqueville’s time almost incomprehensible way – to subject one majority, that of a particular society, to another, even more omnipotent and even less visible one. We may return to this apparent contradiction later, but for the present discussion it is sufficient to observe that the term ‘majority’ has two further meanings in the sense that it may refer either to the majority in a given state or to the majority of ‘the world;’ while in the latter case, it may once again be asked whether we speak of the majority of states, or the majority of the states’ population, since a united human race is, as of yet, no less a fiction than a united nation. In our own time, the declarations of the UN, accepted sometimes by unanimous, at other times by majority vote, or the universal principles drafted by its officials, which supposedly express the consensus of humanity or at least the opinion of its majority, bear a more uncomfortable resemblance to Rousseau’s ‘general will’ than it is usually recognized.

The concept of the majority is thus a highly complex one, and tyranny can also be understood in at least three different ways. The traditional definition, which goes back to Aristotle and has remained influential throughout the Middle Ages, states that tyranny is an unjust government which serves the good of one person, and not ‘the good of the community subject to him’ (Aquinas 2002: 8), or, in other words, ‘the common good.’ The concept of the common good is no doubt vague in itself, but for the time being it suffices to say that it is a both material and moral good, and certainly not the sum total of individual goods, let alone the good of the majority, the greatest happiness of the greatest number, as a utilitarian approach would suggest. What the definition does not imply is that tyranny is unjust because it is the rule of one person, as the current use of the word sometimes hypnotically suggests; in the classical approach, the rule of one person may also be just, since justice is not a function of popular participation, but of the intentions of the ruler and the outcomes of governance. (One might also say that the modern formula of ‘government by the people’ plays no part in the definition, only that of ‘government for the people;’ although very few contemporary communitarians would follow Aristotle or Aquinas up to this point.)

The concept of justice can be derived from other sources than that of the communitarian common good, of course, the most prominent being the liberal concept of individual rights. Most modern definitions of tyranny take the infringement of ‘natural’ or ‘human’ rights as a criterion: as was the case in the debates on the American Constitution – see Robert Dahl’s reconstruction of Madison’s argument in his A Preface to Democratic Theory (2006: 7) – and the same self-evident formulas are often found in modern textbooks. The definition of ‘rights’ is no doubt problematic in itself: most authors agree that it was hardly determined with any precision which rights counted as ‘natural’ ones in the American context of the late eighteenth century; nor is it clearly established today which rights are ‘universal,’ a fact most prominently illustrated by the conflict between the more narrowly understood ‘basic rights’ of John Rawls’ A Theory of Justice or The Law of Peoples, and the ever expanding set of human rights in the documents of the United Nations. Or, to take one step further, should rights be so broadly defined as the ‘right of every individual to do as she pleases,’ the consequences would be obviously anarchic, since the essence of government consists in the very fact of preventing at least some individuals from exercising this right, thereby making every form of government tyrannical. (Let us note that not everyone refrains from the anarchic outcome. Robert Paul Wolff’s classic In Defense of Anarchism (1970) quite logically deduced the rejection of all forms of political government from the Kantian notion of autonomy; while the alleged absurdity of the conclusion had led others formerly to reject the premise, along with its grounding in natural or human rights, as it was done by early conservatives in the wake of the French Revolution. A more sophisticated form of the latter’s argument can be found in such twentieth-century communitarian works as Alasdair MacIntyre’s After Virtue, which famously called the belief in human rights the modern day equivalent of ancient superstitions about witches and unicorns (2007: 69-70).

Regardless of how one defines rights, however, or whether such a definition is possible at all, the second concept of tyranny is obviously different from the first, and the third one, although often mentioned together with the second, also differs from it. This third definition equates tyranny with non-divided power, or power without any external constraints. While the connection between the potential infringement of rights and the uncontrolled exercise of power seems intuitively convincing and perhaps empirically verifiable (for which both Madison and Tocqueville offered examples), in a theoretical sense they can only be connected on the basis of a more fundamental anthropological supposition, nurtured by the Hobbesian view that lust for power is an elementary feature of human nature: it has no intrinsic limitations, and can therefore be restrained only by the similar ambitions of others. All this, however, will not make the two definitions (tyranny as the infringement of rights and tyranny as unrestricted power) identical, only interrelated; or, in a slightly different wording, the concept of tyranny will never be interchangeable with the modern concept of dictatorship.

The expression ‘majority tyranny’ has therefore as many possible meanings as the various interpretations of its elements allow for. It may refer to the power of society as a whole, its political community, its active voters, or its elected bodies, exercised by a relative, absolute, or qualified majority, either in a synchronic or in a diachronic way, empirically or hypothetically, domestically or internationally, in opposition to the common good, violating individual rights, or without checks and balances. This amounts for at least 288 combinations, and, although some of those clearly belong to the world of oddities, there remains enough to make it impossible to point out one as the sole true form of majority tyranny.