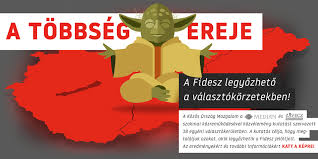 It’s funny how in a democratic age everyone is in the majority. I still remember the ad after our last national consultation which claimed that a 99% majority of the people supported the government. (The Hungarian version of “We Are The 99%.”) Now an opposition movement campaigns against the same government with the slogan “The Force Of The Majority.” In times like this, being MORE is evidently a seduction impossible to resist.